In the Baltics, Estonia Has Minted the Most Fintech Mini and Unicorns

In the Baltic region, Estonia is emerging as a fintech powerhouse, having minted the most fintech unicorns and being home to the largest number of fintech minicorns, or startups on the rise to becoming billion dollar companies.

A new infographic shared by Audrius Milukas, a venture capital (VC) investor at Open Circle Capital (OCC), showcases the Baltics’ booming tech startup ecosystem, putting the spotlight on the unicorns and minicorns that each country of the region has seen emerged over the years. 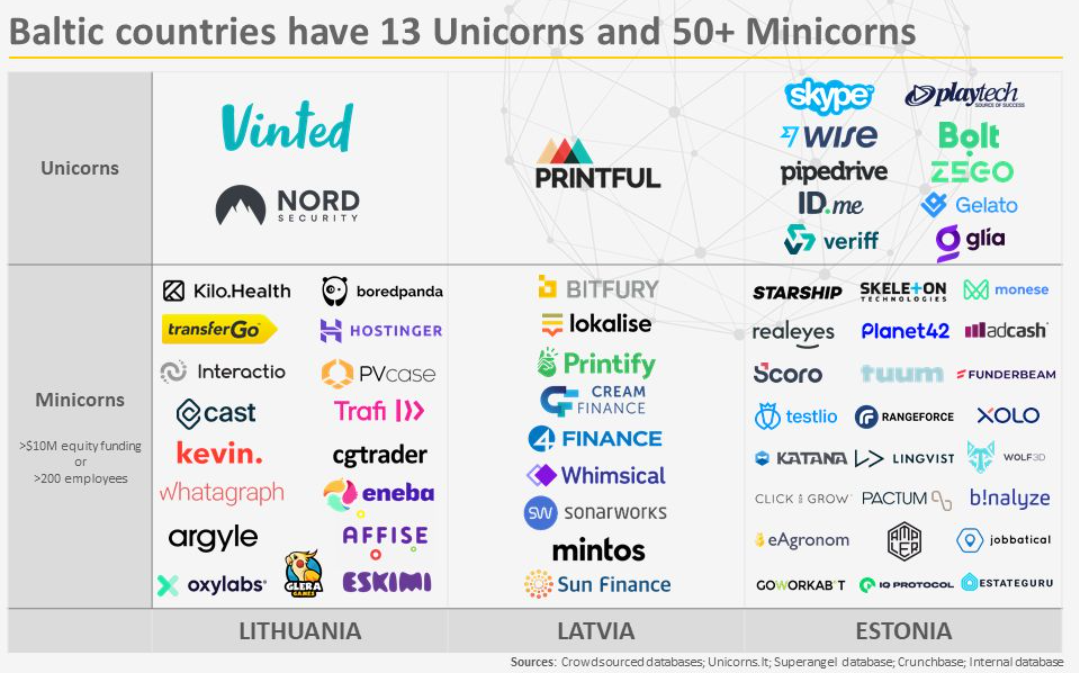 Of the 13 startup unicorns founded by Baltic entrepreneurs and/or based in the region, three are fintech companies of Estonian origins: Wise, formerly TransferWise, a publicly listed money transfer company founded by Estonian businessmen Kristo Käärmann and Taavet Hinrikus in 2011; Zego, an insurtech startup headquartered in London that’s valued US$1.1 billion; and Glia, digital customer service startup that serves over 250 banks, credit unions, insurance companies and other financial institutions worldwide.

Not only is Estonia the birthplace of the Baltics’ fintech leaders, the country is also home to five so-called minicorns. These are defined as fast-growing fintech startups that have raised more than US$10 million in equity funding and employs over 200 people.

Estonia is widely known for its dynamic startup ecosystem. The State of European Tech 2021 report by Atomico highlights Estonia’s leadership as the most entrepreneurial European country for tech startups. According to the report, more than 1,100 startups had been founded in Estonia as of late-2021, making the country the European leader in startups per capita.

Estonia is not only mastering startup creation, the country also leads Europe in investments per capita, data from Dealroom show.

Fintech minicorns in Latvia and Lithuania

With five minicorns as well as, Latvia comes neck and neck with Estonia. Despite having a relatively less developed startup ecosystem, Latvia has nevertheless managed to grow some of the region’s most successful fintech companies which specialize primarily in lending.

Latvia has a dynamic fintech industry with more than 110 startups based in or operating from the country, data from Dealroom, Venture Faculty and Startin.lv show. This is more than the total number of fintech companies in or originated from Estonia, which the government estimates stands at 80+.

Lastly, Lithuania hasn’t minted any fintech unicorn yet, the data show, and is home to only two fintech minicorns: TransferGo, an award-winning international money transfer provider founded in 2013 in Lithuania but headquartered in London; and Kevin., an end-to-end payment infrastructure for online, mobile and physical sale operating across the European Economic Area (EEA).

This is despite Lithuania having the most expansive fintech ecosystem across the Baltic region. According to the 2022 Fintech Landscape in Lithuania report, 265 fintech companies now operate in the country.

60% of these companies have their headquarters in Lithuania while the remaining are foreign companies that view the country as their gateway to Europe.

Bank of Lithuania to Double Down on Payment Service Providers