According to the study of the growing market of the alternative finance, conducted by the European P2P platform Robo.cash, Switzerland, Latvia, Russia and Argentina are expected to join the global alternative lending market in the coming 2-3 years.

According to the results of the Swiss market of the alternative finance, Switzerland is among those countries which are expected to show remarkable growth. In 2014 the University of Cambridge estimated its volume of transactions to ca. €12 million per year and put Switzerland after Sweden, the Netherlands, Estonia, Finland, etc. In 2015 the volume of the local P2P market grew to €25.2 million and had been expected to reach €60 million in 2016.

There are more than 40 peer-to-peer platforms which provide the market growth and gain momentum thanks to the long-standing traditions, fine reputation of the banking system and the high-quality of life standards of the country.

The second country in focus is Latvia with its platforms gaining weight in the European FinTech market. In 2015 its market volume was estimated at €15 million and lagged far behind the leading countries. In 2016 KPMG Baltics put the Latvian platforms after the German and French thanks to the highest dynamics in the continental Europe.

Its geographical position with a barrier-free access for the European investors to a broad variety of platforms played a great role here. The specialized legislative regulation expected until the end of 2017 promises to give an additional impulse for the development of the local P2P sector.

With regard to Russia, there are several major P2P-players and the sectoral growth is extremely low today. The main problems are the quality of borrowers and the lacking demand on the alternative lending. In 2015, the Bank of Russia estimated the market volume to ₽ 111.3 million ($2.8 million). The key factor for a qualitative breakthrough is expected to be given by clear regulation of the internal P2P market. 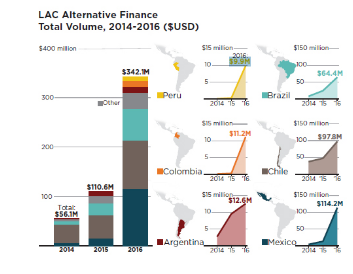 However, the major contribution of Russia to the global alternative lending promises to be realized through the growing popularity of micro-loans here. The annual volume of the lent amounts increased from 131 to 195 billion rubles and the contracts number grew from 8.7 to 19 million from 2014 to 2016.

In 2016, the Cambridge Center of Alternative Finance reported the total volume of the P2P-market of Argentina to be equal to $12.6 million. Although the leaders of the South American and the Caribbean online lending market are Mexico, Chile and Brazil, Argentina stands out greatly at the moment. It is one of the largest countries of the region but its P2P lending market volume is 10 times lower than in Mexico, 8 times — Chile, and 5 times — Brazil.

There are no more than 20 peer-to-peer platforms. Taking into account the standard of living, nation specifics and demand for loan funds and the attraction for foreign companies, Argentina will demonstrate the greater dynamics of the market in comparison to its neighbours in a coming couple of years.