“We are on the right path to finally make a spurt with the Lithuanian Skype. If startups get the support of banks we will witness a much faster breakthrough which will result in a win-win situation for both sides“,

says Danielius Stasiulis, a spokesman for the startups of financial technologies. One success story of such kind acts as a catalyst – it shakes the entire market of startups in the country and then entrepreneurs can learn from the example of good practice instead of working by trial and error method.

Cooperation between banks and FinTech was also discussed last week at the Rise Vilnius FinTech Week – the first financial technologies week ever organised in Lithuania. Two participants of the event – Gediminas Misevičius, Open Banking Partnership manager at Swedbank and Danielius Stasiulis, founder of Startup Division and co-founder of BitDegree, agreed to share their insights on cooperation challenges between banks and FinTech startups and what would make the name of Lithuania sparkle on the European FinTech map.

The Need of Success Stories

Danielius Stasiulis has been working with startups for the past 10 years. He says tendencies in the region are changing: big companies no longer consider activities of startups just as a game and themselves look for cooperation opportunities. However, in Western Europe it is successfully happening for over 7-8 years, Southern Europe is also far ahead of us. 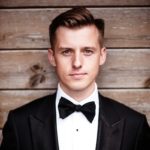 “Such cooperation can be a win-win situation for both sides, but the trouble is that nobody is taking part in the game yet. Everything must start from the top of big banks – a decision has to be made at the CEO level that it is important to develop the innovations with startups both internally and externally.

As our banks are Scandinavian, they are simply given solutions to work with local startups, but at the end of the day an innovation manager appears who no one listens to and it is difficult or even impossible for him to change the entire organization. Nevertheless, if the European Commission had not launched the PSD2 initiative, that naturally leads to Open Banking, it is unlikely that the banks would have started thinking about the startups”

According to him, today it would be difficult to name the examples of successful cooperation between banks and FinTechs because of the lack of smooth dialogue between the two players.

“When one side is asking and the other is giving, such relationships are not appropriate. All FinTechs wish to sell something or cooperate in some other way, yet banks are often skeptical about the deal thinking the company is lightweight. It shouldn’t be this way,“

The mentioned cooperation should be of equal interest to both parties. According to Stasiulis, big banks are not best known as hotbeds of quick innovations, bearing in mind that adoption of new ideas is expensive. Instead, banks often use their internal resources to make minor and unsubstantial improvements and to solve smaller problems.

“It is startups who offer innovative changes. Developers of such changes usually are driven by personal motivation, they work at night and without a reward, but have brilliant ideas and lots of energy. When it comes to banks, they lack ideas, but have the entire system, sales, network of customers and resources. Precisely here grand synergy is possible, it is only necessary to reconcile the visions, desires and goals,”

In his opinion, Lithuania lacks only successful examples of such cooperation.

“Unfortunately, we have quite a few FinTech startups, it could be really more of them. There are first strong rudiments that have been developing for over ten years. Unfortunately, we do not yet have remarkably famous success stories such as Skype in Estonia which would shake the entire market and showcase the way how to do business. Success stories tend to multiply, but currently startups have no one to learn from and work by trial and error method. However, as far as I can see, in recent years the number of strong teams has really increased and without doubt we are approaching this breakthrough,”

Gediminas Misevičius, Open Banking Partnership manager at Swedbank, is convinced that cooperation must always be a win-win matter for both sides, otherwise there will be no cooperation at all. When asked what kind of benefits the bank would receive if cooperation with FinTech startups would be more intense, he named similar arguments as Stasiulis did.

“Sure, as a bigger institution the bank has greater bargaining power – just like in purchases – the bigger the company, the easier it is to negotiate better conditions, because everything depends on volumes. Bank benefits from FinTech for several reasons. First of all, we want to offer our customers as many products or solutions as possible, to create added value along with financial services. This means that the customer is not only provided with basic banking services but also with additional ones, for example, a detailed customer cost analysis based on his payments and suggestions on better money or subscriptions management.

Secondly, FinTech startups have many good ideas we either missed to consider or just did not have enough resources to develop ourselves. Many IT professionals work with direct financial banking products, with their full digitisation and ever-changing compliance with requirements, preventing a bank from developing faster. Finally, most often banks have different systems which make it more difficult to internally create a new product than to integrate it using solution offered by a third-party. Eventually, mediation can serve as an additional source of income – after all, integration also costs and must pay off,“

When asked to give specific examples where the bank actually benefited from such cooperation, Misevičius stressed that these are too early to discuss because so far, they are at the beginning stage (limited by relevant agreements). Until today we can only refer to examples in Sweden, where the idea of open banking partnership came about much earlier.

“I could name two of them which are already introduced in the market: Erply, accounting software system SaaS – platform on our e-bank in the Baltic countries, focused on small and medium-sized enterprises. With the consent of the client, the software automatically synchronises all bank transactions in the legal client’s accounts and, accordingly, makes records in the accounting application in Swedbank’s e-bank. Any details unrecognised by the application can just as well be managed manually. After that, the application will be able to automatically assign records according to this data. Erply operates based on accounting principles and requirements applicable in each country and has various options depending on the chosen plan.

Another example is Mina Technologies (former name Mina Tjanster), offering subscription management products for retail banks in Sweden. A personal finances application, which is currently available in Swedbank, makes it easier for clients to manage their subscriptions to services they use in their everyday lives (Netflix, Spotify, Internet, TV, magazines, etc.), they can cancel any subscribed services simply with one click “Cancel” and the service will be discontinued, so clients will no longer be billed the next month.

In the same way, one can order new services from the entire list, even to change the internet provider into more reliable or simply cheaper with just one click.  In this case , the client gets a kind of non-financial service, but an additional one, yet the benefits are obvious“

Both cases illustrate that startups (and not only) have the opportunity to offer exciting new products to the market by using data base of the bank’s clients, thus to rapidly expand their circle of customers.

Must Be Win-Win Situation For Both Sides

To enhance this partnership even more, Open Banking Partnership manager at Swedbank suggests startups to begin with offering a cooperation model that is beneficial not only to startups, but to the bank as well. It is important to understand that the bank is also concerned about the matureness of the startup and its capabilities to keep promises.

He suggests startups should not be afraid to refer to the bank and offer cooperation in various fields. Moreover, there should be no frustration if expectations do not meet the reality – maybe the model is not well considered or perhaps it would be better for the startup to begin with launching an independent product to the market first and come back again after its potential has been proved and only then try to develop it with the help of bank’s clients.

Lithuania Positions Vilnius as a City-Sized Sandbox for Technology Businesses