The Baltic states have become a hotbed for blockchain technology with the region being named “a crypto paradise” for its high concentration of Bitcoin full nodes, strong initial coin offering (ICO) activity, and the fervent support from local governments.

This year already, Lithuanian ICOs have raised US$249 million, placing the country third in the world for funds raised, while Estonian capital Tallinn stands as one of the top ten cities in the world.

On the topic of blockchain technology, all three Baltic states struck an accord to support blockchain adoption notably in capital market innovations, and are also individually encouraging the development of blockchain their own way.

Estonia has established itself as a technologically advanced and open community. Today, the country has the most startups per capita in Europe, with success stories that include TransferWise, and Skype.

When it comes to blockchain, Estonia is perhaps one of the world’s earliest adopters. The country has been testing the technology since as early as 2008, and since 2012, blockchain has been in production use in Estonia’s data registries.

Estonia’s preferred software is KSI Blockchain, by Guardtime, which is also used by the likes of the NATO Cooperative Cyber Defence Centre of Excellence, the European Union IT Agency, and the US Defence Department.

These e-services are part of the broader e-Estonia program, a movement to facilitate citizen interactions with the state through the use of electronic solutions. One particular initiative that has been praised by its innovativeness and potential is the e-Residency program, which was launched in late-2014 and allows non-Estonians to access services such as company formation, banking, payment processing, and taxation. It is aimed towards location-independent entrepreneurs such as software developers and writers. 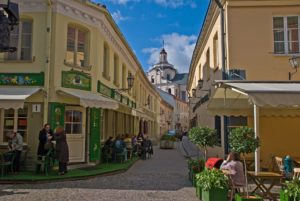 Lithuania has been promoting itself as the gateway destination to the European market for fintech startups from around the world. But the government has been putting extra effort into developing the local blockchain community and boost blockchain development.

One noteworthy initiative is being undertaken by the Bank of Lithuania. Expected to launch in 2019, LBChain is set to be the world’s first regulatory and technological sandbox platform service that would allow domestic and foreign companies to develop and test blockchain-based solutions.

Antanas Guoga, a member of the EU Parliament, businessman, philanthropist, and poker player, is a strong advocate for blockchain technology. Guoga launched the Blockchain Centre Vilnius, a hub for startups, education and community events, earlier this year.

Lithuanian ICOs have raised over US$500 million within the past 18 months, the third largest amount behind the US and China. Notable blockchain startups include WePower, a blockchain-based green energy trading platform, Bankera, a startup developing an online bank for the blockchain area, and  Universa Blockchain, a blockchain protocol for businesses and apps. 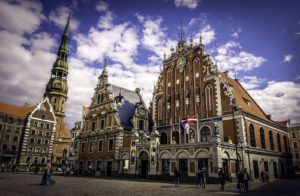 Even though Latvia is not as outwardly visible in the global blockchain community, there have been several notable initiatives. For instance, Latvia hosts one of the Baltic State’s key blockchain conferences, Baltic Honeybadger, the country is attracting a growing number of blockchain startups looking to raise funding through ICOs, its nationally owned airline AirBaltic was the first ever airline company to accept cryptocurrency payments back in 2014, and last year, Latvia’s Baltic Sotheby’s International Realty became the first realtor in the Baltics to accept cryptocurrency payments for property purchases.

Some of Latvia’s notable blockchain startups include Hodl Hodl, a cryptocurrench exchange platform and the organizer of the Baltic Honeybadger conference, Digipulse, a digital assets inheritance platform, and PowerMining, a company that builds cryptocurrency mining farms out of shipping containers, and exports them around the world.

BitFury, though registered in the US, was founded by Latvia native Valery Vavilov, who still remains active in the local blockchain community. BitFury is one of the world’s largest full-service blockchain technology in the world. The firm develops and delivers software and hardware solutions for businesses, governments, organizations and individuals.

Featured image: Map view of the Baltic states on a geographical map, by Victor Maschek, via Shutterstock.com.

Upcoming Fintech and Blockchain Events in the Baltic States