With more than 1,400 tech startups operating in the country, Estonia stands at the leadership position as Europe’s most vibrant startup hub in Europe.

The country also has a world-class track record in building unicorns, having been the birthplace of no less than 10 billion-dollar tech firms, namely Skype, Playtech, Wise, Bolt, Pipeline, Zego, ID.me, Gelato, Veriff and Glia. This vibrant startup scene is fueling the growth of the Estonian venture ecosystem. An extensive analysis by Ain.capital, an online media dedicated to the European tech ecosystem, looks at the country’s most active venture capital (VC) firms backing the region’s promising tech startups.

Most of these funds focus primarily on the domestic market, but also target the broader the Baltic, Nordic and European regions. Many are also actively investing in the fintech industry, backing up-and-coming ventures like Nordigen, Veriff and Montonio.

Superangel is an angel group based in Tallinn that invests in the artificial intelligence (AI), robotics, mobility, logistics, fintech and software-as-a-services (SaaS) sectors, cutting cheques of between EUR 100,000 and EUR 1 million largely for seed and Series A rounds. The firm is backed by prominent entrepreneurs and angel investors from the tech ecosystem, who have collectively invested in more than 100 startups worldwide.

Superangel currently has 41 companies in its portfolio, including fintech startups Montonio, Nordigen, Grunfin and Salv.

In June 2022, it launched a new EUR 50 million fund, which it said it will use to invest primarily in deeptech startups from across the Baltics and Nordics.

Founded in 2016, Change Ventures is a venture capital (VC) firm based in Tallinn. The VC focuses on tech startups with a preference for business-to-business (B2B) and SaaS businesses, as well as founders across the Baltic states and their diasporas around the world.

It currently has 26 startups in its portfolio, including fintech companies Planet42, Nordigen, Inzmo and AskRobin.

The intensive five month accelerator program is focused on validating, developing and selling products to business customers, providing select startups with access to over 250 international and local mentors with B2B startup experience.

Startup Wise Guys is one of the largest early stage investors in Europe, having backed more than 300+ startups with founders from more than 40 countries. Alumni and portfolio companies in the fintech industry include Trisbee, Traders Alloy, Tarla.in, and PayQin.

Tera Ventures is an Estonian VC firm investing in early-stage digital startups in the Baltics and Nordics. The VC helps some of Europe’s most disruptive technology companies scale and become global leaders, backing ambitious founders and their compelling visions at pre-seed and seed stage.

Tera Ventures is industry agnostic but does have preferences for fintech, automation, health, the future of retail, as well as themes like AI and machine learning (ML). It currently invests out of its EUR 45 million 2nd fund.

Tera Ventures has 24 startups in its portfolio, including fintech startups Montonio and Monese. Founded in 2019, Lemonade Stand is a Tallinn-based VC fund focusing on early-stage B2B startups from the Baltics and Eastern Europe, regardless of their headquarters’ location.

Lemonade Stand’s investments range between EUR 25,000 and EUR 300,000, and include successful companies in its portfolio like Woola, Fyma, and Cachet.

According to its website, Lemonade Stand currently has 38 portfolio companies, including fintech startups Plural, Dillali, Grunfin, Ender Turing and Montonio.

Founded in 1999, Trind Ventures is a venture fund focusing on European tech companies, investing in promising startups from seed rounds all the way to sustainability.

Trind Ventures primarily focuses on the Northern and Central European region and looks for tech innovations that are benefiting end users, community-driven inbound business models, and most importantly, companies with a long-term path to a defensible competitive position.

Trind Ventures starts from the seed round, initially committing between EUR 100,000 and EUR 500,000, and can follow-on with investments of up to EUR 3 million per company.

The VC currently has 21 companies in its portfolio, according to Dealroom, and has made no investments in the fintech industry.

Karma Ventures is an early-stage VC firm specialized in late seed and A round investments in Europe’s most promising deeptech software startups. The firm backs companies with strong ideas unique technology, customer traction and global ambition, accompanying entrepreneurs in figuring out the path to growth in all aspects.

According to its website, the VC currently has a portfolio of 14 startups, including fintech companies Tuum (formerly Modularbank), Xolo and Lucinity.

In November 2021, Karma Ventures closed its second fund with a hard cap at EUR 100 million. The firm said it will use the capital to continue backing the most promising early-stage European deeptech startups.

Yolo Investments is a venture capital focused on seed and Series A stage investment opportunities across gaming and fintech. Yolo Investments’ mission is to invest in outstanding people with bright ideas who are focused on innovating and disrupting the norm in all manner.

Founded in 2017 as Vereeni Investments, Yolo Investments has created a thriving ecosystem with ventures across a variety of industries, including fintech, gambling, media, software development, crypto and blockchain.

Yolo Investments today holds investments in more than 55 companies with a total of EUR 375 million in assets under management. Fintech startups in its portfolio include Curve, AskRobin and GoodBank. 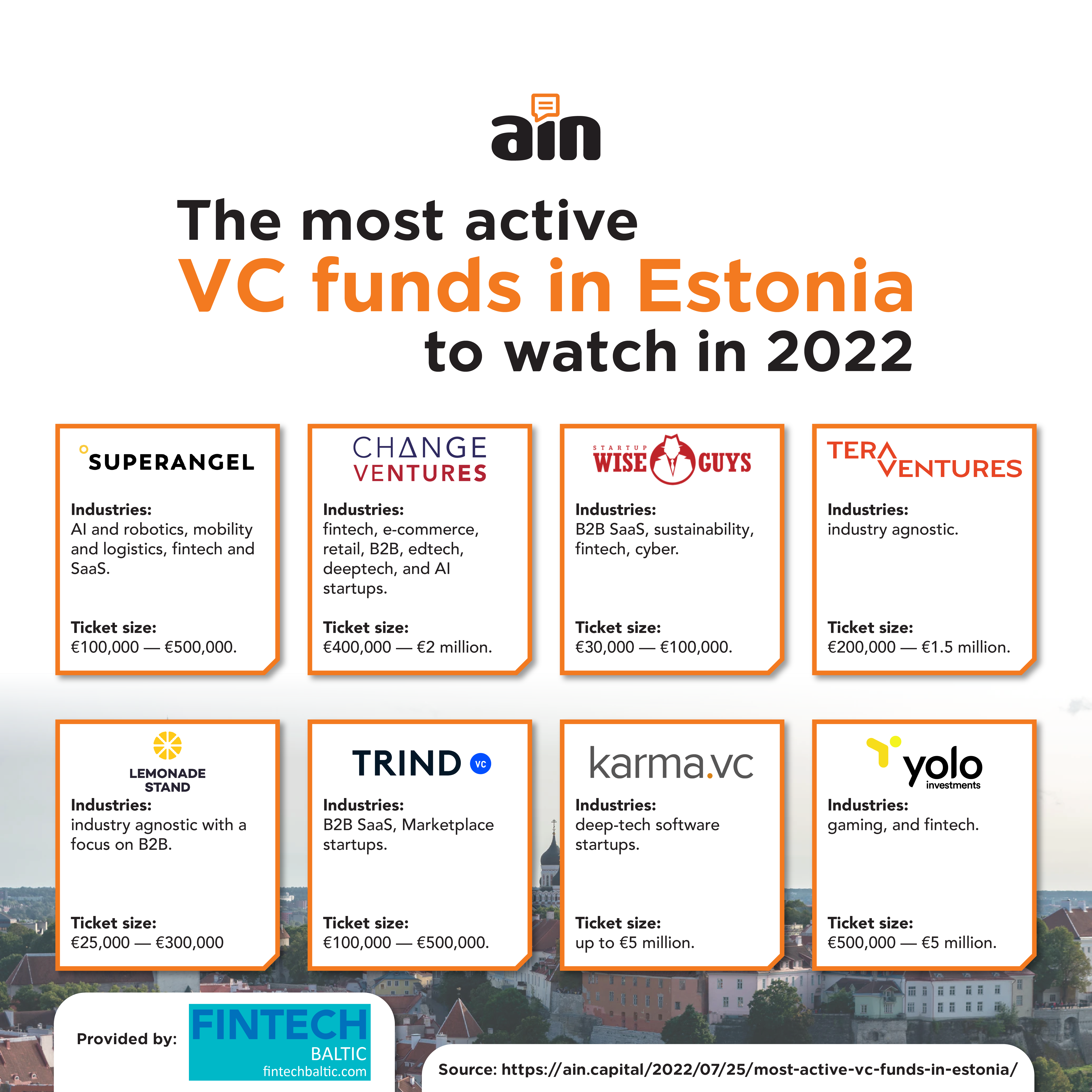 The Most Active VC Funds in Estonia to Watch in 2022